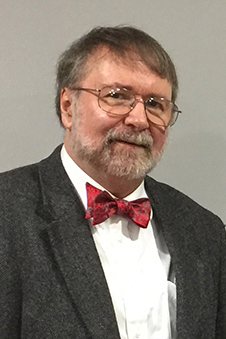 Now celebrating 50 years in paranormal research, Paul Eno is one of the world’s most experienced and controversial supernatural adventurers. One of the first ghost investigators of the early 1970s, beginning while he was studying for the priesthood, his theories and methods are now shaking the paranormal world to its core. Paul’s early mentors included parapsychology pioneer Dr. Louisa Rhine, Fr. John J. Nicola S.J. (technical advisor for the film The Exorcist) and legendary, first-generation ghost hunters Ed & Lorraine Warren (of The Conjuring fame).

Paul graduated from two seminaries but, in 1977, was expelled from a third because of his paranormal work with less than two years to go before ordination. He ended up as an award-winning New England journalist, including six years as a news editor at The Providence Journal. A popular Fate Magazine author in the 1980s and 1990s, Paul has written numerous articles, and co-authored or contributed to five other books with authors Brad Steiger, Timothy Green Beckley, Tim Swartz and others. He is the author of eight books on the paranormal and two on history. Two of his earlier works (Faces at the Window: First-Hand Accounts of the Paranormal in Southern New England, New River Press, 1998; and Footsteps in the Attic: More First-Hand Accounts of the Paranormal in New England, New River Press, 2002) are already considered classics of paranormal literature.

Paul’s latest book is Dancing Past the Graveyard: Poltergeists, Parasites, Parallel Worlds and God, Red Feather, 2019. The next, to appear in 2021 and co-authored with Ben, is Behind the Paranormal 3: Uneasy Skies, featuring their own UFO encounters and those of their most prominent radio guests.

Several of Paul’s cases have made headlines around the world, including the Bridgeport poltergeist outbreak of 1974 and the ongoing Litchfield County (Conn.) paranormal flap. Paul has appeared on the History, Discovery and Travel Channels, and he and Ben have lectured all over America and in Europe.

Along with Ben, Paul has co-hosted the CBS Radio (2009-2014) and WOON 1240 AM/99.3 FM Boston/Worcester/Providence Sunday destination show “Behind the Paranormal with Paul & Ben Eno” for nearly 13 years. The show has an estimated three million listeners in 60 counties.

BEHIND THE PARANORMAL WITH PAUL & BEN ENO

Streaming live on ONWorldwide.com, TUNEIN.com, and the Paranormal Radio App from Talkstream Live

Send questions or comments before or during every show: paul@behindtheparanormal.com